Can Toronto’s buildings be carbon-neutral? 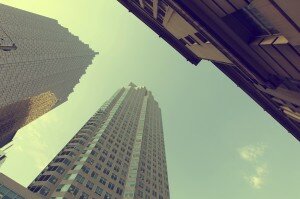 Earlier this month, the International Union of Architects (UIA) issued a stunning announcement. Member organizations of the UIA – representing more than 1.3 million architects in 124 countries around the world – unanimously adopted the “2050 Imperative,” a declaration to eliminate CO2 emissions in the built environment by 2050.

This lofty goal was initiated by Architecture 2030, a non-profit research organization with the mission of transforming the built environment from a major contributor of greenhouse gas emissions to a central part of the solution to climate change.

Specifically, the 2050 Imperative states that:

Living in Canada’s largest city, we have to ask how Toronto can participate in this movement. There is, in fact, a Toronto member group – Toronto 2030 District – a relatively young organization that is currently in the process of forming partnerships to create a common vision and strategic course of action for long term greenhouse gas reduction across downtown Toronto.  The Toronto 2030 District has identified a lack of overall coordination within the conservation community as a key barrier. This includes programs and policies that use different targets or measurement processes and a lack of detailed district-wide information on consumption by building floor area, type, age, and use. Much of the available data exists in different formats and databases but is not brought together in such a way that it can inform strategic decision making for policy development, infrastructure planning, conservation program targeting and energy/water use tracking.

Toronto Atmospheric Fund will be a key partner for the Toronto 2030 District in supporting the alignment of energy conservation policies and programs with the shared goal of dramatically reducing fossil fuel consumption and GHG emissions generated by the city’s building stock.

We are already moving in the right direction. TAF was instrumental in raising the standards for energy efficiency in the construction of Toronto’s new buildings through the Toronto Green Standard, whereby buildings must exceed the efficiency requirements set out in the Ontario Building Code (OBC) by 15%. Buildings that exceed the OBC standards by 25% or more can qualify for a substantial development charge refund of up to $31/m2.

We are also exploring how energy reporting policies can be best implemented. These policies entail benchmarking the energy consumption of individual buildings annually. Data out of the U.S. shows a positive correlation between tracking energy use and reducing energy consumption. If Toronto launched an energy reporting requirement next year for all commercial and multi-residential buildings larger than 50,000 square feet, annual GHG emissions would drop by approximately 350,000 tonnes per year.

Can Toronto’s buildings be carbon neutral by 2050? This is the moment to join a global effort within the building sector to push toward an ambitious, but certainly achievable, goal.

One Response to Can Toronto’s buildings be carbon-neutral?