Peter Knight, President of Generation Investment Management LLP was the guest speaker at TAF’s packed 2013 annual meeting event.  Generation manages a significant portion of TAF’s endowment and Peter, formerly chief of staff to Al Gore, co-founded the company with Gore and David Blood.  Generation seems to avoid talking about their results (which are exceptional) and their size (in the billions).  But he did explain their investing approach which considers how sustainability flows from the best management practices of top-performing companies, and how a focus on sustainability leads them to achieve superior financial results. 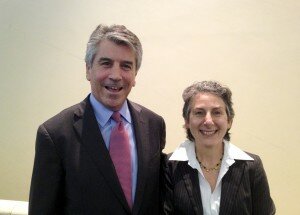 Generation also pays attention to the meta-issues, including carbon exposure and risk.  Peter referenced a report by the Generation Foundation published a year ago and several others including by Citi Bank which showed that currently discovered fossil fuel resources, if they were  all to be extracted and consumed, would cause global warming that would exceed by three times what is considered to be the maximum level of global warming before the planet’s climate is dangerously de-stabilized. Assuming that new awareness and policy trends start to clamp down on carbon emissions over the next few decades, these “stranded assets” – like old telephones, computers, lighting, vehicles, etc. when new models and technology comes along – will drag down valuations of some of the biggest global companies.  Think of your portfolio…

To top it off, the Generation report estimates that $600 billion is projected to be spent exploring and developing fossil fuels annually, expanding the potential stranded asset pool even further.  And Peter had some harsh  words for the rating agencies on this front.

On the positive side, the core of impact investing is a recognition that we need to think long term, since the climate crisis will not be solved overnight, to look beyond the bottom line of the next quarterly report, and to find the companies which can contribute to the solution. TAF continues to invest every dollar prudently, in compliance with its City-Council approved policy, and increasingly in service of its mandate. As the first Canadian client of Generation, that’s been a win-win.

This entry was posted in General. Bookmark the permalink.