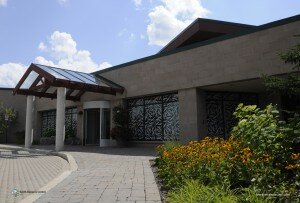 Bryan and I recently visited one of the world’s most efficient buildings, the Earth Ranger’s Centre (ERC) in Woodbridge, Ontario. Earth Rangers is a kids’ conservation organization that certainly walks the talk of environmental stewardship. In addition to educating children on biodiversity, conservation, and sustainability, Earth Rangers has implemented an extensive list of energy efficiency and resource conservation measures in their headquarters. This means that the building uses almost 90% less energy than similar buildings. 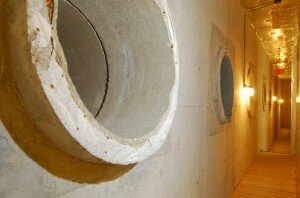 Located within the Kortright Centre for Conservation, the ERC uses a host of conservation measures, including the aptly named earth tubes and an impressive building integration system. The earth tubes are a series of nine subterranean concrete tubes that preheat (by as much as 20 °C in the winter) or precool (by as much as 10 °C in the summer) the intake air. The tubes provide 100% fresh air while reducing energy consumption. Space heating and cooling is provided by a vertical loop geothermal system. The building integration system goes beyond simple occupancy and CO2 sensors to incorporate security systems, power monitoring, and the entire HVAC system. If the system doesn’t detect people within the building, it sends notices to everyone’s phones and work stations that the building’s alarm system will be activated and that lighting and HVAC systems will go into unoccupied mode should no one respond within an hour. The fully integrated system also allows Andy Schonberger, Director of the Earth Ranger’s Centre, to monitor almost every system in the building. The ERC also makes its live energy consumption readily available. If you want to check it out, just visit their websiteand see how they’re doing. 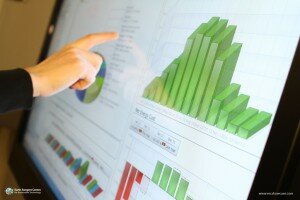 Andy isn’t stopping at having the ERC be simply the highest LEED rated building in Canada. He is continually looking into ways to conserve every kilowatt-hour he can get his hands on. In fact, Andy and the facility team want to upgrade ERC’s data centre, even though Computerworld ranked it fourth greenest in the world in 2010. During our visit, the building integration system showed that the data centre was consuming almost 21% of the building’s total electricity draw, which is a significant opportunity for reduction.

With such an impressive array of energy efficiency measures, organizations are flocking to ERC to support and study what makes it tick. I highly recommend learning about all the energy efficiency and conservation measures from their website or by booking a tour.

Would you want your workplace to be as efficient as the Earth Ranger’s Centre? What would it take to get your building there?